Here are the facts: John Maine threw five pitches to Nyjer Morgan in his last start for the Mets and was pulled. Maine was then placed on the disabled list with chronic shoulder fatigue.
Which leads to the question: is it possible that Maine’s shoulder fatigue showed up in the pitching data? With the Bloomberg Sports’ Pro tool we decided to try and find out, focusing specifically on his release point.
The following graphic shows John Maine’s release points for the Morgan at-bat, along with the corresponding strike zone.

Quadrant A is of particular note – that’s the spot from which two of his pitches originated. The left side of the graphic shows the release points, while the right side is the strike zone. Highlighting a particular zone results in those specific pitches being highlighted in the strike zone.
Both pitches were balls, and neither reached 84 miles per hour. Or to put it another way, Maine released 40% of his pitches from Quadrant A, and 100% were balls. The three other pitches Maine threw were right on the edge of Quadrant A.
Five pitches is an insignificant sample size, so let’s look at all the pitches Maine has thrown this season and how many originated from Quadrant A. 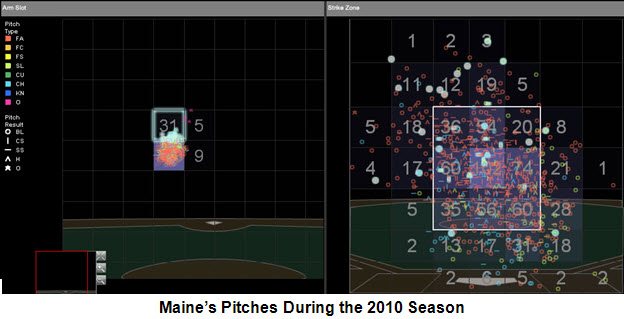 Maine has thrown 768 total pitches, of which 31 came from Quadrant A. You can also see that Maine throws the majority of his pitches from the quadrant directly below A.
The following table provides a pitch results breakdown, including how many of the pitches were greater than or equal to 85 miles per hour. 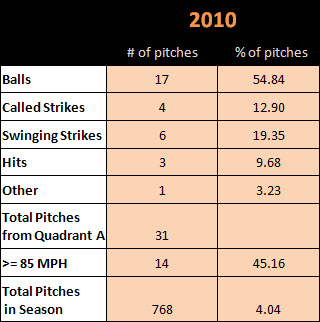 What we see is that 4% of his pitches came from Quadrant A, more than 50% were balls, and just about half were greater than or equal to 85 miles per hour.
To get a clearer picture, here are John Maine’s pitches from 2008-2010 in an aggregate form. 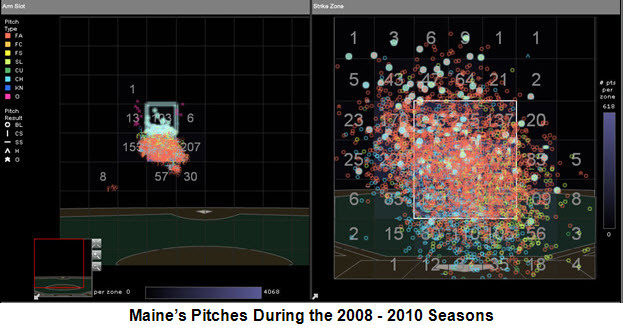 The number in Quadrant A is a little difficult to read – it says 103.

The following table shows how many of Maine’s pitches over the years were thrown from Quadrant A, along with the results. 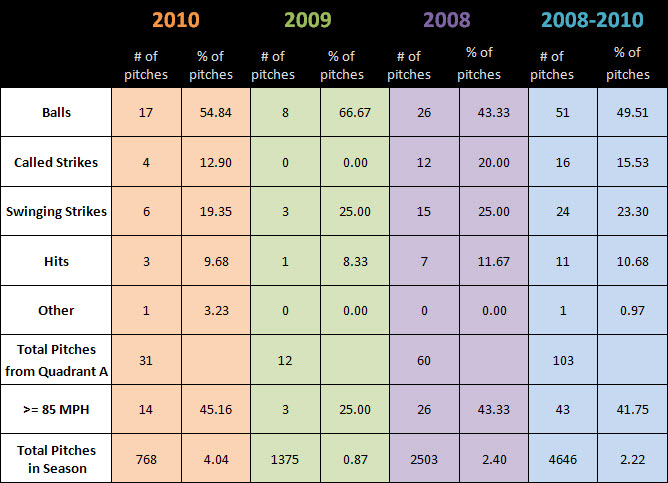 The data provide a clearer picture of what happened, including:

1) This season, Maine has already thrown nearly 1/3 of the total pitches he has ever
thrown from Quadrant A (103 for his career, with 31 this season)

2) Percentage wise, Maine has nearly doubled the number of pitches released from
Quadrant A (4% versus 2.21)

3) In this particular game, the velocity from the release point in Quadrant A was lower
than usual (41.74% for his career versus 0 for the game)

What exactly is wrong with Maine is best left up to the medical experts, and the data do not point directly to shoulder fatigue. What is evident is that this season, statistically speaking, he was releasing the ball from a higher point with more frequency, and was pitching differently.